A bartender who won a global competition for creating a cocktail described as a ‘love letter to the Isle of Man’ has been invited to develop his skills at two of the World’s best bars.

Drew Fleming, 21 and from Douglas, saw off competition from some of the world’s most up and coming cocktail stars to scoop the ‘50 Best Bars scholarship’ in Barcelona last month.

The Department of Environment, Food and Agriculture (DEFA) supports more than 100 food and drink producers on the Island to develop and grow their businesses, this forms part of the Food Matters strategy to encourage economic growth in the sector.

Clare Barber MHK, Minster for DEFA, said: ‘Drew’s exceptional talent and passion for cocktail making and his use of delicious local ingredients is very inspirational. This is a fascinating way for new audiences to sample the Island’s unique produce and we are very excited to see what he does next.’

The annual 50 Best Bar Awards are centred on the crowning of the World’s best bar, which was won by ‘Paradiso’ in Barcelona, where the Manx star picked up his award.

As part of his prize, he will now spend three months at two bars, which made it into the top ten at the awards. He will start at the Connaught Bar in London, which was named the World’s Best Bar in 2021 and 2020, before moving on to Katana Kitten in New York.

Drew, who is the general manager at the KiKi Lounge in Douglas, said: ‘It was so exciting to win and now gives me this opportunity of a lifetime, to learn from the best cocktail makers and continue to champion Manx ingredients at some of the world’s most respected bars.

‘I really hope I can use this experience to help grow the bar scene on the Isle of Man when I return as I am laser-focused on earning KiKi and the Isle of Man a Top 50 listing.’

His award-winning drink will be served throughout October at KiKi Lounge on Loch Promenade, which is owned and operated by local hospitality group Extra Fancy. 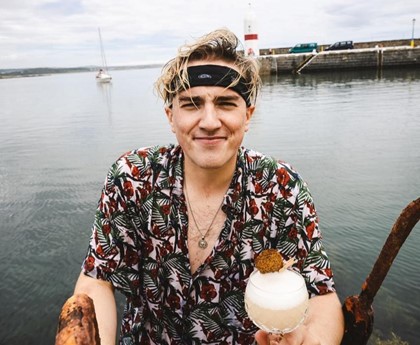